The story and photo below appeared in the Winter 1958 issue of The National Stock Dog Magazine, which was published by E. G. Emanuel under the tagline: “MANY are the Publications for Bench SHOW DOGS — BUT ONLY ONE Devoted to the Live Stock WORKING Breeds.”

“A little 3 year old Brown county, Ill. girl is alive today because a collie named Blaze knew what to do in an emergency.

It happened on the Duane Hecox farm when both father and mother were busy with the chores. Each thought their daughter Laurel Dawn was with the other.

But Dawn, apparently wanting to see the “little piggies” and not realizing the danger, climbed a 4-foot gate into a lot where a sow and her newly-farrowed pigs were kept.

The sow’s anger was matched only by the fury of Blaze who came bounding to the attack the instant he heard Dawn’s screams.

But the sow wasn’t easy to drive off. Again and again, Blaze, transformed from a gentle collie to a furry ball of fury, tore viciously at the sow’s nose and finally drove her away.

Dawn’s injuries indicate that, had it not been for Blaze, the sow would have fatally mauled and bitten the little girl. As it was, Dawn’s shoulder was broken, cheek gashed, a tooth broken off, and she was cut so badly on the hip it required 30 stitches to close the wound.

Blaze’s rescue was all the more remarkable because he had never been able to jump fences or gates of any height. In spite of this handicap due to an injury received as a pup, Blaze did clear a gate close to 4 feet high when he heard Dawn’s terrorized screams. 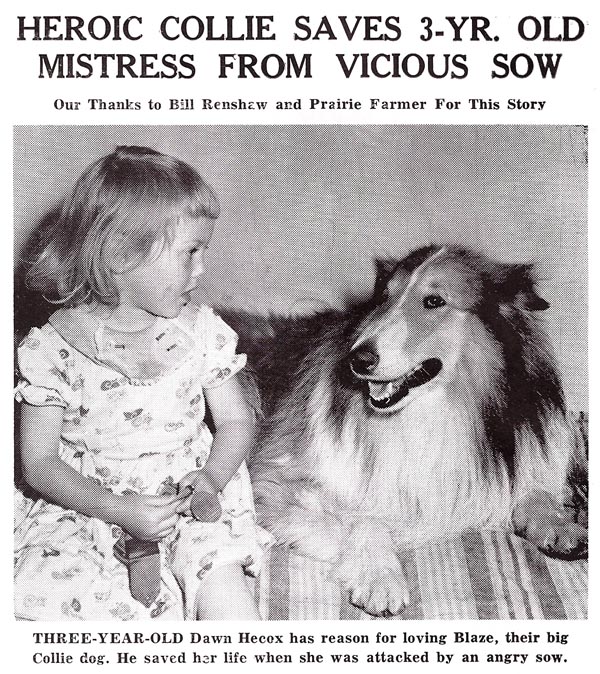 For the heroic rescue of his little mistress, it is thought that Blaze stands a good chance of being named the “National Dog Hero of Heroes of 1957”.

If he wins this distinction, Blaze and the Hecox family will receive, among other things, an all-expense trip to Chicago for the presentation banquet.

This award is made annually by a large dog-food manufacturer. The winner’s owner will also receive a $1,000 U.S. Savings Bond. Whether he receives the award or not, the Hecox family is sure of one thing — they wouldn’t part with Blaze for any price.”