The Isley family in Iowa bred English Shepherds for over 40 years during the first half of the 20th century.  Their brochure and the letter below from Mr. Isley provide some insight into their experience with the breed.

In reply to your recent letter, I will say that we appreciate your interest in our business and we also enjoy your English Shepherd News Letter.  We are glad to note the interest take in the breed and also the fact that you have established a new non-profit organization for the registration of shepherds.  It seems to be a clean cut organization for its members and other people who wish to register and we wish you the greatest success.  When we went into the dog business about 40 years ago, the American Kennel Club was the leading club for registration, and was owned by such people as Albert Payson Terhune and a number of wealthy hobbyists.  It was a very select group and would not accept farm dogs and some others for registration.  At that time Mr. W. R. Watson was the leading breeder of English Shepherds in the U.S., but even though the English Shepherds were registered in England, He could not register them here.  After attempting to get into the AKC, he finally made connections with the United Kennel Club of Kalamazoo, Mich.  He was then selling about $30,000 worth of dogs a year, and had his business at Oakland, Iowa, and kept about three stenographers in his office.  HE WAS THE FIRST MAN TO REGISTER ENGLISH SHEPHERDS IN THE UNITED STATES. We bought our stock of him and continued to register our dogs in the UKC.

Mr. Watson’s understanding the of English Shepherd was that they orginated in England, and at one time they were all Black and White and Tan, or in other words, Tri-colors.  His favorite was black with large white collar with or without tan eye spots and other tan markings.  However the colors have changed to the point that brown or sable dogs, plain or with markings were also very popular.  In his 25 years of breeding good heelers he had bred some straings strongly for white and produced a strain that was quite popular and very good for work.  So during over 40 years of business we have raised and sold black and white, black and tan, tri-colors, and also white or mostly white dogs.  Our plain black and tans have always been and are today our slowest sellers.

Not so many years ago a certain man started in the shepherd dog business.  He bought several dogs of us and no doubt some from other people and started up.  Soon after he proclaimed himself as an authority on shepherds, wrote a book on them and started a shepherd dog kennel club.  he claimed that all good shepherds should be black and tan and that was the only kind he raised.  Any with white markings were off color and he sold them for less.  This was quite amusing to us but many of his disciples took him seriously.  I think it helped our business some because it helped us sell our black and tans.  However today our brown or sable pups with or without markings are the fastest sellers.

Our best customers are farmers and we found that they did not want them for breeders as much as for stock and watch dogs and did not care for the registration, so during the boom years after the war we were selling around 1600 a year.  We cut out the registration to save time and expense and have never carried it on since.  We sell them at a reasonable price and guarantee them to everybody on a year’s trial.  We have to replace a few but last year our replacements were only 5 per cent of the total sales.

We advertise continually in 12 farm magazines at a cost of about $2200.00 a year.  We hvae not applied for space in your News Letter because we do not register our dogs and felt that an ad of ours would be out of place in it and might be considered unfair competition by your other advertisers.  However we are strong for you and your friends who are putting out such a fine little publication in a nice, clean-cut way.

“We got our English Shepherd, Peggy, from Fairview Kennels in Cedar Falls, Iowa, in 1958. She came to us via Railway Express, in an orange crate! I wish I had a picture of Peggy standing up but you can see those eyes – so much kindness there! Peggy was so very special. When my daughter Pauline was about 5 and her brother, Wayne was 2.5, we all moved to southern Indiana and lived, temporaily, close to 3 small, very deep, lakes. One morning the children were just outside the door, playing, I thought; when I went to check on them – no kids! I called for Peggy (as she was their nursemaid and stayed right with them) and she came to me quickly but her front feet and legs were wet! I’m not a swimmer so I guess she could hear the panic in my voice. When I asked “Where’s Pauline? Where’s Wayne?” she really did the “Lassie” thing and led me to them – dipping their toes in the closest lake!” 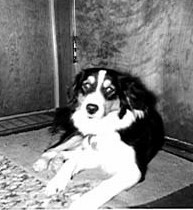 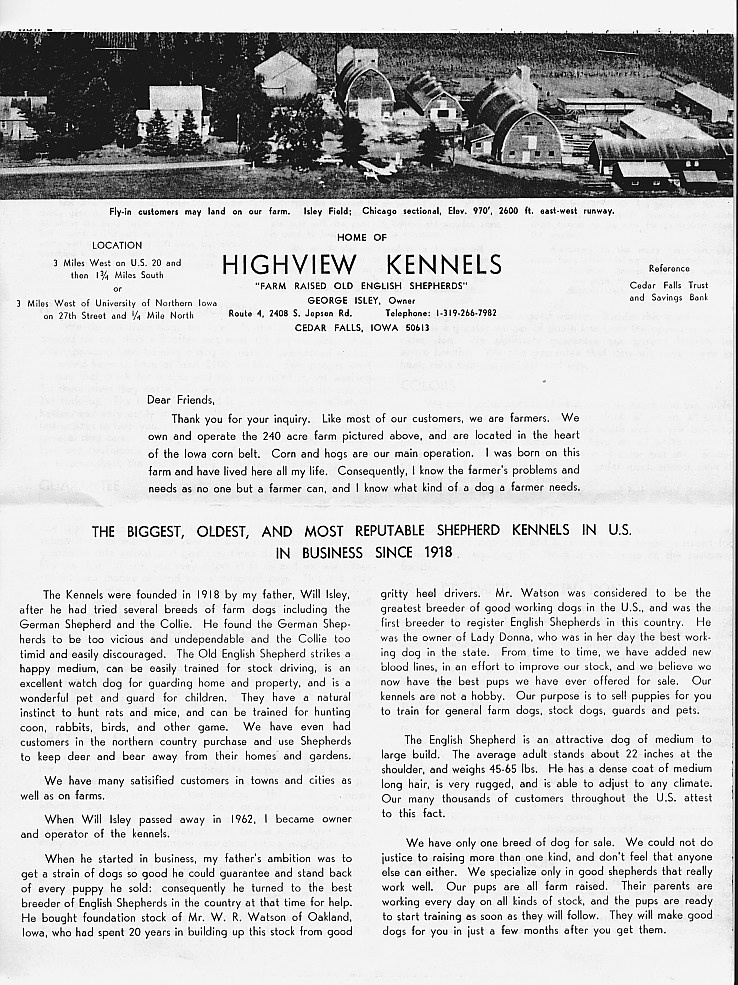 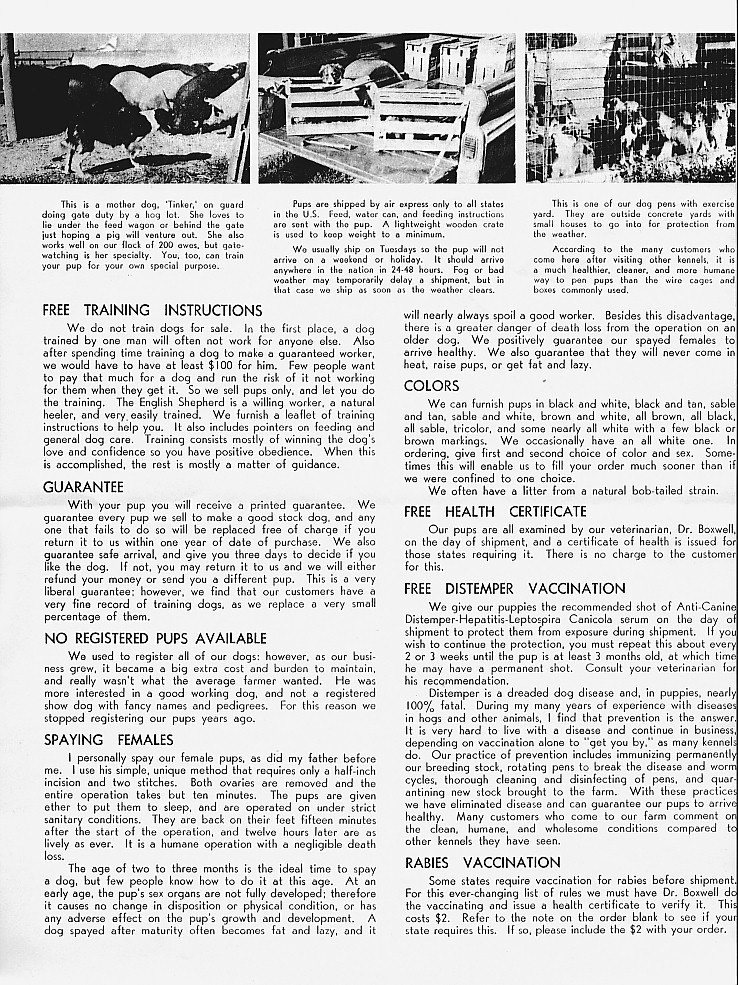 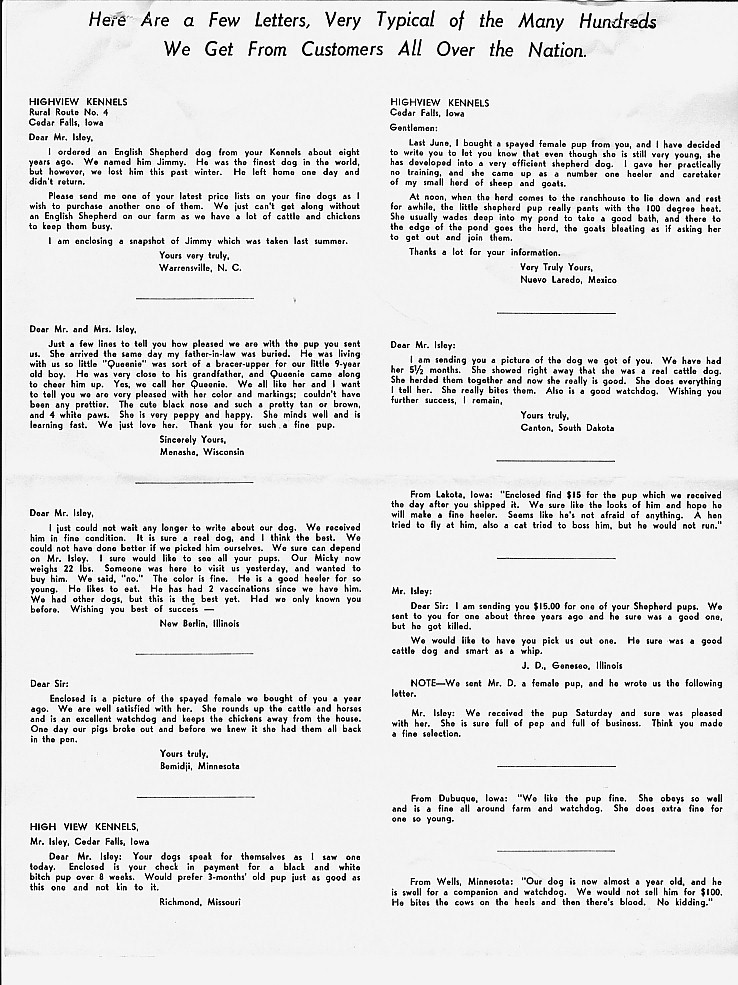